Dear Students, Supervisors, Lodge Magi and Friends of the SOL,

I am writing to wish everyone a blessed Yuletide and a very happy new year 2019 and I am also writing to share a short symbol-prayer that can be likened in some ways to a very simple guided visualization.

We have seen lots of changes this year in the SOL school and I have been impressed with how everyone has adapted and continued to work towards our vision of practically teaching the Mystical Qabalah.

Thank you to everyone in admin, all the supervisors, lodge leaders and those who teach workshops for the school for all your hard work.

New admissions will remain temporarily suspended for several months yet, but later in 2019 I plan to begin accepting new students into the school once again.

I would like to share what I call a symbol-prayer with you all and hope that as many of you as may feel inclined might join me in this visualization from time to time throughout the festive period into the early part of the new year.

While I was meditating and praying a few days ago a vivid image arose before me spontaneously and I felt into it and then flowed with it as a prayer for the school.

What do I mean by “felt into it” and “flowed with it?”

Not everyone is predominantly visual when working on inner levels. “Seeing” involves using the inner counterparts of all our five physical senses so that we touch, hear, smell, taste as well as “see” as we intuit using the sacred imagination as an organ to perceive non-physical reality.

Relax into a meditation posture, as you have been taught, and is now automatic to you.

Enter the silence within and be aware of the Presence of your living soul that is uniquely connected to the Divine through your individual spirit.

See the land of Logres, the inner matter of Britain, on a midwinter’s night, see an indigo sky lighted by the moon and stars spread out across the land. Everything glows in the silver night-light.

Then, become embodied in the vision, so you are in Logres.

Feel yourself standing in an enchanted wood next to a clear river, see on a hill nearby the place that is known as Camelot.

In the midst of the city of Camelot, there stands a mighty keep, called the “Castle of the King.” Some of you will know this scene well, others of you may come to know it at some future time.

You can see a beautiful walled garden near the castle and within the parameters of the castled city of Camelot.

The White Hart points his antlers to the sky with a nod of his head: see a star begin to descend towards the city of Camelot at the heart of Logres.

The stag then touches his hoof to the ground and you are aware of earth-light gathering and coalescing deep beneath Camelot.

See a star emerge from the earth beneath Camelot and rise upward resting just above the Castle of the King, see the Star from above and the Star from below merge and become one.

The joined stars that make an entwined hexagram shape, see light shine over Logres emanating from the six-pointed star.

Pray for the school in any way you feel inclined, follow your intuition in the light of the star.

Within the light of the star is great peace and healing. Let that light shine.

Gently return to normal consciousness, close-down firmly from engaging with the scene you projected into prayerfully.

I wish you all the very best and may all good things come to you as we move forward in the work of the SOL.

Normally, we would not make a working, such as that which I have just shared, public.

However, there have been many people, that were students of the SOL in the past, inquiring about the school and expressing a desire to keep in touch with us that I wanted to share this with everyone so that as many as wish to join in the symbol prayer can. In any case, in the genuine work, there are no secrets, all that is called for is discretion.

In peace and light this Yuletide, 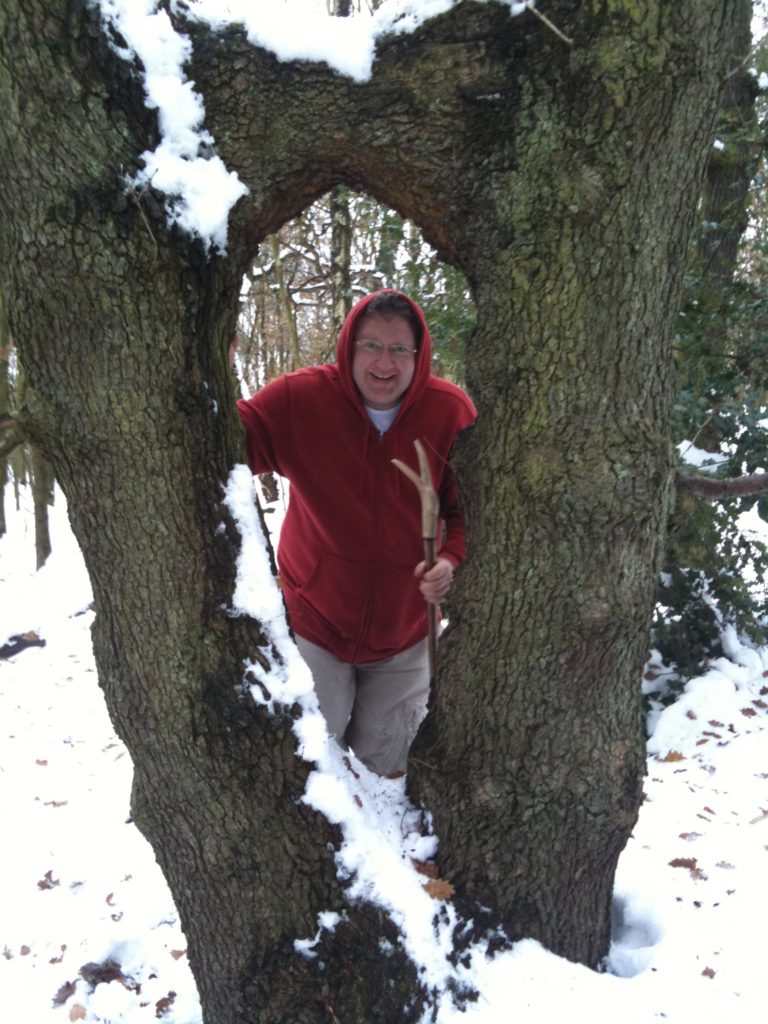 Having a Mr. Tumnus moment at a tree known as “the Portal Tree” where I have done much work!