In the world of the occult, Dolores Ashcroft-Nowicki is big news.

The head of the Servants of Light School of the Occult Sciences in Britain, Ashcroft-Nowicki is in Trinidad for a week of workshops in increasing one’s personal power through mysticism. 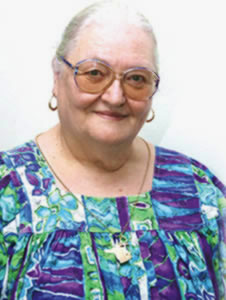 Before you break out the holy water and start reciting psalms in defence of your immortal soul, understand that Ashcroft-Nowicki doesn’t consider herself a witch, Satanist or anything like that. What she does, she said, isn’t the craft or even magic – or “magick” as some would have it. “Sacred science comes close to it. Forget magic,” said the smiling 75-year-old, who came into the Guardian office last week.

Stressing that the “sacred sciences” require patient and dedicated research, she came down hard on those who flirt with the occult for quick results. “There are people out there who read a couple of books, who go to a couple of lectures or workshops and say, ‘Ahh, that’s a way to make money.'”

Her opinion on the rash of books and shows on magic and wicca (the name practitioners prefer for witchcraft) is equally firm. “There’s nothing deep to them. They’re crap. And they get published because people want something different. The church isn’t giving them what they want and they fall into the wrong hands.”

This is her fourth visit to Trinidad; over the last three years she’s delivered workshops similar to those she’s here to give, to small groups. They were invited by word-of-mouth and flyers placed at occult bookshops.

They’re “training”, Ashcroft-Nowicki said, in “striving to become a better human being, to use the faculties of mind, body and spirit that nine times out of ten we don’t even know we’ve got.” She paraphrased science writer Arthur C Clarke, saying, “Any sufficiently advanced science is analagous to magic; we try to make what we term magic more acceptable and accessible. “What people tend to think of magic is simply something we’ve forgotten how to use or haven’t learnt how to use yet.”

Looking like any other matronly tourist in her brightly patterned, flowing cotton dress, Ashcroft-Nowicki wore two pendants on a gold necklace. One was an ankh, an Egyptian fertility symbol; the other was the head of Anubis, the Egyptian god of the underworld. In other words, symbols of life and death. Her work, she said, is geared toward “healing, to get in touch with our own higher self, to seek knowledge.” Alternatively, she goes “right back into ancient days and put together what we call a ritual drama.”

Looking for Ashcroft-Nowicki on the Web, you’ll find accounts of some of those “ritual dramas”. For instance, she has presided over a “Herne hunt” – a pagan flight through a forest by moonlight in which participants pretend to be Herne, a mythical huntsman, and his bride Celemon. In myth, those who see the huntsman die or go mad. In reality, as told on the Web site witchvox.com, those who saw the huntsman simply got very drunk.

“What I’m not doing is preaching or teaching in any way something that is anti-religion,” she said. “My father taught me that you never ever decry another person’s religion, because it is real to them.”

Her mentor and the founder of her school, Ernest Butler, told her too that “a good heathen is better than a bad Christian and vice versa.” Her work is to “try to look for that which binds them together.”