Lodge of the White Dove 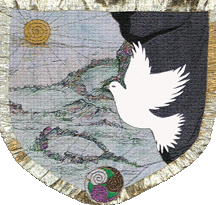 The Lodge of The White Dove was raised in November 2005, and was the second of the four Scottish SOL lodges to be formed.   Our meetings are held 4 to 6 times per year on Friday evenings, in Edinburgh.

Our Lodge Patron is Odhran, who is connected by story and dream to the Isle of Iona in Scotland’s Inner Hebrides. Odhran (aka St Oran, Odhrain, Odrun, Odran, Otteran) also is associated with St. Columba and the monastery he established on Iona in 563 AD, after being exiled from Ireland. Some versions of the tale say Odhran came with Columba from Ireland (and possibly was a relative). Others say he was already there on Iona and may have been a Druid who walked between the old and new traditions. 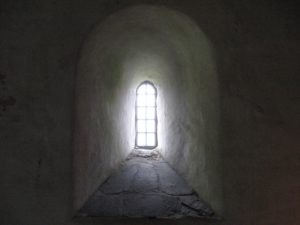 The burial ground on Iona – the Relig Odhrain, surrounding St Oran’s Chapel – is named after him. There are at least half a dozen versions of why this happened, but the basic story goes that when Columba and his followers tried to build the first chapel on Iona, the walls kept falling down. The stories say Columba had “divine intervention” – or possibly a conversation with a huge black seal — that indicated a foundation sacrifice would be required if his work on Iona and throughout Alba was to be successful. 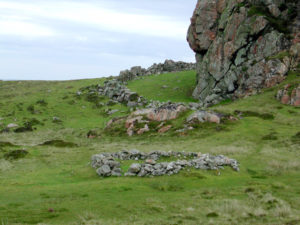 A Middle Irish rendering (approx. 13th c.) reports: “Then said Colombcille [sic] to his household, ‘It is well for us that our roots should go under the earth here;’ and he said to them, ‘It is permitted to you that some one of you go under the mould of this island to consecrate it.’ Odran rose up readily, and this he said: ‘If thou wouldst accept me,’ saith he, ‘I am ready for that.’ ‘O Odran,’ saith Colombcille, ‘thereof shalt thou have the reward, namely, that none shall his request be granted at my grave, unless he shall seek it first of thee.’ Odran then fared to heaven [and] Colomb then founded the church of Hii.” (‘On the Life of St Columba’, transl. by W. Stokes).

Another old version continues the story and reports that three days after he was entombed alive (some say in the earth, some in a cavity), Columba opened the grave, to look once more on the face of the dead brother. When he did so, Odhran opened his eyes and exclaimed, “There is no great wonder in death, nor is Hell what it has been described.” Columba then said: “Earth, earth on Odrun’s eyes, lest he further blab,” — and had him covered up again.

A saying long connected with Odhran is: “The way we think it is may not be the way that it is at all!”  Like the Egyptian deity Anubis, the archetypal guide upon the path, Odhran is also a walker between the worlds and an opener of the ways.

Although Odhran is from the Celtic-Christian tradition, our Lodge is eclectic and we use material and influences from other traditions whenever it suits our purpose, weaving all together like the traveling soul-paths of Celtic knot-work patterns.

We try to ensure that all our members have the opportunities to utilise their unique gifts, within the Lodge, and to experience different techniques and some of the responsibilities involved in planning and leadership in ritual work, so that they will hopefully emerge better equipped in this area.

Our Lodge is close knit as most of us were working together even before the Lodge was raised. Connections between the Scottish Lodges run deep and we have actively worked to strengthen the bonds between ourselves, Lodge Bride in the Scottish Borders, Lodge Taigh na Mor Riggu on the west coast and Lodge Unicorn na h’Alba in the Highlands.

At the moment we are almost full to the capacity of our small, private temple room, but occasionally have room for a guest. 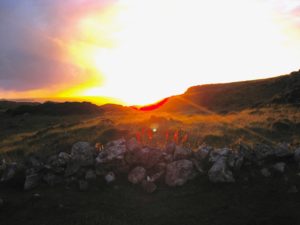 Star in the Night
Peace of the Earth
Will of the One,
Heart of the Sun