Servants of the Light is not a religious organisation and we do not teach religious dogma associated with any faith, we are a school that studies esoteric philosophy that is often non-religious. We actively research spiritual philosophy, sciences, or perennial wisdom traditions, that are historically deeper aspects of several world religions. In the SOL we have members that are Wiccans, esoteric Christians, Spiritualists, those that follow a “Shamanic” path, Buddhists, druids and agnostics or who do not subscribe to any religious labels.

SOL is a school that supports students in finding their unique spiritual path by exploring the reality of the nature of their unique “soul” and spiritual identity.

We explore teachings about the human soul and its immortality or survival beyond physical death in the light of wisdom teachings from many epochs of human history such as ancient Egyptian beliefs and myths, the sacred Kabbalistic teachings of Judaism, Hermetic Qabalah, Orphic and Ancient Greek, Platonic and Aristotelian, teachings, Taoism, Chaldean and Zoroastrian philosophy and astrological teachings.

The SOL School has roots in the work of mediums and teachings evolved through trance mediumship of teachers such as Robert King (one of the evidential mediums who as part of the staff of Julia’s Bureau that was set up by the Spiritualist pioneer W.T Stead), Dion Fortune and W.E. Butler. Dolores Ashcroft Nowicki’s work as a spiritual mediator has also been an aspect of our school’s development and the current Director of Studies, Steven Critchley, is a Spiritualist and medium, with a background in esoteric Christianity and the pagan religion of Wicca.

We are often described as a modern-day Western Mystery School. We teach the esoteric and psychic sciences online, practically and theoretically, particularly with reference to the Western Esoteric Tradition and the Mystical Qabalah .

These sciences, which in their true form constitute the Yoga of the West, have previously been ‘occult’ (which means “hidden”), but nowadays they can be taught in a more open fashion and “occult” is often not a very helpful term because it is often misunderstood. The term “Yoga” simply means Union and the esoteric traditions of the West point to ways in which union with the Divine within might be attained, in this context the “Yoga of the West” does not have anything to do with adopting body postures as taught in popular yoga classes or in the Vedic systems.

For nearly fifty years now the Servants of the Light School, founded by W.E. Butler, has taught thousands of students from many nations under the leadership of Dolores Ashcroft-Nowicki who served as Director of Studies from October 31 1976 – 11th June 2018. Dr Steven Critchley is now Director of Studies of the SOL having succeeded Dolores in the role as her named successor after working as Assistant Director of Studies for several years. 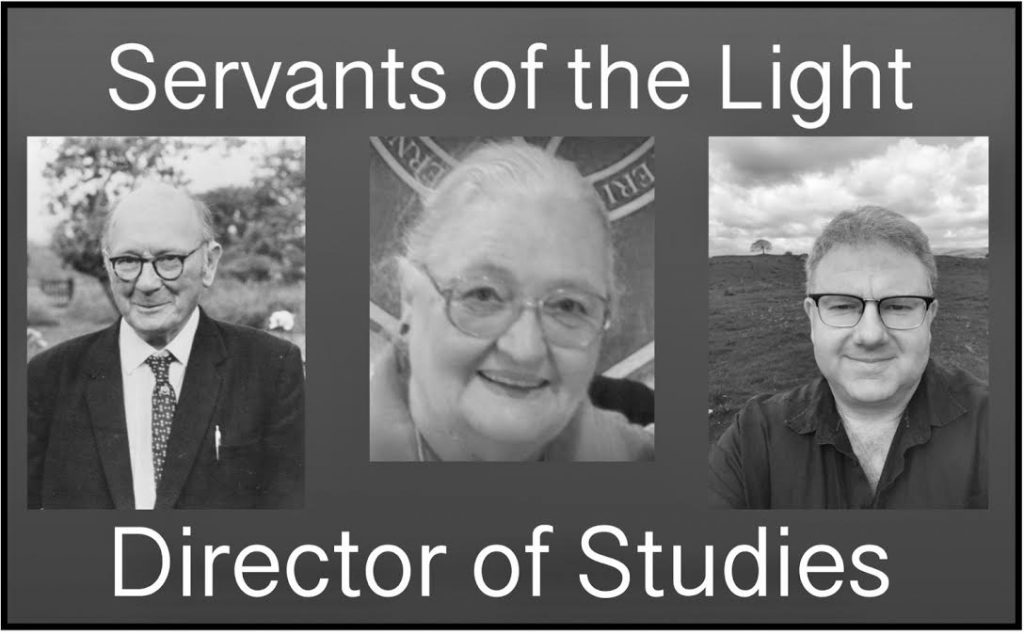 It is the goal of the SOL to teach practical ways of working with the Mystical Qabalah in the context of the Western Mystery Tradition to all who wish to learn, both as a school and an esoteric order, into the future.

The Servants of the Light School began as the Helios Course in 1964 when Gareth Knight and John Hall appointed W.E. Butler as Director of Studies of a course they had already begun, with six lessons already written. Ernest Butler added another 44 lessons to the Helios Course and then in 1973/1974 it became The Servants of the Light Correspondence Course that has 50 Lessons. For decades the SOL was based on the British channel island of Jersey until Steven became Director of Studies. Steven founded a new company, registered in England, Servants of the Light Ltd (company number 10988287) at Michaelmas 2017 to administrate the business aspects of the school.

W.E. Butler received his training in Dion Fortune’s Fraternity of Inner Light, which in turn stemmed from The Hermetic Order of the Golden Dawn. He was also trained by the psychic Robert King who was also one of the early bishops of the Liberal Catholic Church (which values theosophical and mystical Christian teachings as well as respecting the wisdom found in all world religions). W.E. Butler was an ordained Liberal Catholic Priest and served as Director of Studies until he retired from the position in 1975, he died in 1978, when he was succeeded by Dolores Ashcroft-Nowicki, third-generation psychic, mediator, author, lecturer and workshop facilitator.

The purpose of the SOL is to assist in spreading esoteric knowledge in an ethical manner to all who want to receive it, regardless of religious denomination, gender, nationality, race, age, social position or income. All who desire to do so should be able to study the Mysteries, the true inner spiritual heritage of the West.

SOL is not affiliated with any political organisations in the same way as we are not representative of any religious traditions.

The School is volunteer-run. There are no offices and no hired staff, and not even the Director of Studies or the Supervisors get paid for the work they do. All students pay is a low cost per correspondence course lesson to support the running of the course. You will also need to get one or two text-books. No other costs are involved. There is no membership fee.

We emphasize independence and free thinking.

The school is organised as a loose structure to emphasize this and in order to avoid all forms of sectarianism. Our students are expected to draw their own occult conclusions and to depend first and foremost on their own judgment.

For 50 years now, SOL now has taught thousands of students in twenty-three countries. A wide range of traditions are represented within the school both historically and contemporaneously: we count ourselves fortunate to have Wiccan witches, Pagans, Christian nuns and priests, Shamans, Hermetists, Kabbalists, Buddhists, Spiritualists, Isis-worshippers and many others among our students. All paths to the Light are worthy of respect.

The SOL is a school. This means that our members work according to a specific curriculum. Each student has a personal tutor who guides the student and helps him or her to get the most out of their studies.

It teaches through correspondence. In other words, there is no such thing as a school building. Each student works in her or his own home, independently of other students.

The SOL is what is termed a contacted School. This means that it is in direct psychic contact with the Inner Planes. This is something we rarely talk about, since it tends to distract the student from the really important issue – their own inner development. Suffice to say that the school is firmly and deeply linked to the Inner Hierarchy, where its true Directors reside.

The fact that the SOL is contacted also means that Initiation, in the true sense of the word, can be conferred within the structure of the school.